Back in April of 2006, I made an assertion that the Las Vegas housing party was nearly over (link). Many folks (expecially those I work with) thought I was crazy and I was given every excuse in the books why the party would continue ad infinitum: We’re running out of land and over 6,000 people are moving here a month; The economy is strong and everyone wants to live here; Housing prices have NEVER declined in Vegas… Understandably, those eternal optimists (many with a vested interest) had their reasons why the party would last, but I knew better.

Today, there are over 30,000 homes for sale in the Valley, and median home prices have already declined by double digits. In addition to the 30K homes for sale, there are currently 28,000+ homes in some state of foreclosure, while the numbers trend higher each and every day--many caused by teaser-rate mortgage resets that cannot be serviced (see reset chart below—the pain has merely just begun). Lastly, Sin City home sales (both existing and new) are now down greater than 50% YoY, and credit/mortgage lending markets are now tighter than the bark to a tree--whereas two years ago, anyone who could fog a mirror could get approved for a $1M mortgage, it now takes a 15% down-payment, steady “verifiable” income and good credit... Something many folks in this town do not have.

So, should one now conclude that the Las Vegas housing party has ended? I would suggest the short-term answer is yes, but we’ve merely just turned off the party music and the drunks are beginning to stagger over to their cars. Little do they know however, the cops have set up a roadblock and DUI checkpoint just outside the parking lot. The fun was great while it lasted, but tomorrow’s hangover will be the most painful ever experienced and many lives will have changed forever. But that is tomorrow and we’re not quite there yet…

When all is said and done, and only if we do not get hit with an economic crisis by then (e.g. banking crisis, dollar collapse, deep recession or worse), we will probably see the bottom to this housing mess around 2010 or 2011. By that time however, home prices in Las Vegas will have dropped > 50% (back to ~ 2000 levels).

I’m sure many would still like to refute the data above--in trying to keep an optimistic outlook on things, but always remember: a turd is still a turd no matter how much cologne you spray on it.

Bottom Line: Las Vegas Housing Data (increasing inventories and foreclosures with declining prices) is going to get much, much worse.

Not looking very good for the US Dollar

Why? It's all related to the falling dollar and loss of investor confidence in the US Credit system. Everything we buy and use (with the exception of housing) will soon get much more expensive--milk, eggs, wheat, beef, fruits, metals, fuel, electricity, etc--Beer Included!!

What's next? The Fed will almost certainly cut rates again on the 31st of this month (in a futile attempt to rescue the banking and financial systems from the deepening credit crisis (actually it's an insolvency crisis--but that's for another day) and this issue (falling dollar/rising inflation) will become even more pronounced... The Fed is scared shitless right now... If they are unable to fix/reinflate the credit markets, we could have a DEFLATIONARY event (which leads to a Depression). In a panicked attempt to stave off this potential deflationary crisis, they will continue to lower short-term rates, print more money and pump liquidity into the banking systems (the very same banking systems that control the credit markets, which are completely seized up--due to all the toxic waste Asset Backed Commercial Paper products they can't seem to offload to some other sucker).

Bottom Line: Inflation will soon be out of control and there is absolutely nothing the Fed can do about it without crashing the economy ( Note: they should be raising short term Fed rates now to prop up the dollar, but that would lead to a major recession {ultimately the cure to our ills} but Gvt officials are unwilling to do this while the housing markets are cratering and with an election year right around the corner). Regardless, they are now pushing on a string in their attempt to reinflate the credit markets and their efforts will probably induce a HYPERINFLATIONARY event that will be followed by or experienced simultaneously with a MAJOR Recession. In several years the dollar will probably be worth 50-60% its current value and its fate as the defacto "World Reserve Currency" could soon be brought to question.

Hold on to your hats folks! 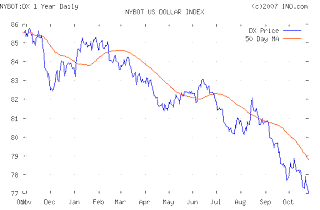