Ushering In a New Economic Era

Though very few people actually realize it yet, 2008 will almost certainly be marked by major change, as the new economic paradigm shift transforms our landscape and entire way of life.

Just like 2003-2006 where in retrospect we can categorize the time as booming years of economic thrill/euphoria, brought about by easy money and cheap credit, I believe 2008 will eventually be regarded as the year of desperation and panic brought about by falling home values, falling stock market, falling dollar, declining state revenues/budget cuts, rising inflation, increasing unemployment and dying credit markets. 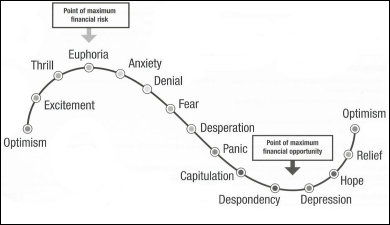 The major inflection-point leading into 2008’s “Desperation and Panic” was crossed in 2007 with the the seizure in global credit markets. As US mortgages began defaulting in large numbers, hedge funds eventually collapsed, Commercial Paper couldn’t be offloaded, banks began to distrust one another, lending standards tightened and the contagion spread to a myriad of other areas (many still unknown or unacknowledged).

Even with the anxiety/fear brought about by the 2007 global credit seizure, the masses were appeased by the constant "denial" of mainstream experts who assured everyone that all was well (the US economy is robust--never stronger); by our Federal Reserve who “had control of the situation”; and by the fact the US stock markets were “in the green” and a great bargain at these P/E ratios…

Note: I expect 2007, in hindsight, to eventually be viewed as “The year of denial”.

As the ongoing Credit Crisis intensifies into 2008, the spillover effect, when combined with the massive wave of new mortgage resets, will crush the already faltering US housing market, and one or more of the large financials (Citigroup, Goldman, Merrill, etc) will most likely have to publicly declare insolvency (which we already know they are). Their recent, yet surprising losses on toxic-waste, marked-to-model, tier-III assets will only be exacerbated by new bond insurer markdowns and eventually, with increasing defaults and rising US foreclosures in 2008, their massive losses will no longer be containable. This candid information, when released, will prove to be staggering and will finally provide the equities markets with the irrefutable justification needed for the massive haircut that will ensue shortly thereafter.

Simultaneous with the above issues and related in nature, we will also soon see unemployment numbers rise as credit continues to dry up (spilling over into commercial loans, auto/boat/motorcycle credit, credit cards, etc) and consumer spending and confidence falls—compounding the equities problems mentioned above.

Furthermore, the dollar will continue to fall as the Fed floods the banking systems with liquidity in their attempt to bail out the financial systems and reinvigorate credit markets. This devaluing of the US dollar will stoke consumer inflation and bring about increased oil prices—causing gas prices to cross the $4 gallon mark in 2008. Public outrage will ensue and politicians will be forced to action (I’m from the government and I’m here to help)—ultimately making the problems worse.

These factors mentioned above, along with many others left unmentioned, will eventually overwhelm the ability of our statistical government manipulators, and skewing economic data to appease/console the masses/markets will become next to impossible—else they risk public backlash and full acknowledgement of their manipulation. This new forthright information will provide the hard evidence for Recession and it will be officially announced in 2008. (I say “official” because we are already in a recession, but falsely reported Inflation, GDP, unemployment figures and numerous other manipulated statistics currently state otherwise--see my link on Inflation or Hyperinflation for a couple of examples).

Bottom Line: The economic euphoria of 2003-2006 is gone, 2007’s denial is nearly over and it will be replaced in 2008 with a new economic era--where desperation, panic and ultimately recession will prevail

We've obviously been in recession for a long time now...

While your cyclical pattern seems to hold true, your assumptions on what the economy will do is way off.

Why so few can see deflation is beyond me. The excess along with huge increases in borrowing and debt will result in only one scenario. Forget the 70's since there was no personal debt at the time. we have been living beyond our means for over 20 years.

Banks, insurers, etc... are contracting their free credit ways.
In fact if you look at th data credit creation has frozen. Risk management is now in favor. The 2 largest reinsurers are basically insolvent based on liability to assets. Lending practices will tighten greatly, bowwowing against your home will dry up as prices continue to fall hard. Defaults will rise at an unpresedented pace.

The financial system is broke right now. After 2rate cuts mortgage applications are falling hard. Not the usual expectation.

Deflation and a depression is a given in my view. We have no where or on one to salvage this. The fed can pump all it want with no affect.

Initially inflation will take hold. Not soon after the higher prices will break the back of the consumer and deflation will flood in.

There will be deflation in real terms, of assets anyway - not so sure about consumer goods (supply will drop along with demand...). But in dollar terms I'd expect inflation.

There's also all those dollars owned by foreigners at the moment flooding back - same effect as the printing press...

Alberta real estate bubble is here. Seems like the same phenomena is happenning in Canada. House prices have dropped $60,000 within the past few months.

My thanks to everyone for posting up.

Anon 9:22:
Your quote: "...your assumptions on what the economy will do is way off... Why so few can see deflation is beyond me. The excess along with huge increases in borrowing and debt will result in only one scenario."

I agree with you and have stated that Central Banks are battling deflation many times before. I just believe the deflationary implosion will take longer than most realize, as the Fed still has much more ammunition in store. ZIRP, more liquidity, etc.

"With bank losses mounting, Ben and the Boyz know that they are waay behind the power curve in their rescue attempts and that deflation is setting in. Therefore, I feel pretty confident in predicting that come December 11th, rates WILL once again be cut....

As an aside, If we are fortunate enough to evade a complete systemic banking failure, I think the tools used (printing presses and helicopters) will force us into a Hyperstagflationary environment (Hyperinflationary consumer price inflation combined with slow-to-no output growth, rising unemployment, and recession). This should allow us to muddle through until ~ 2010, but unfortuantely I don't think the "Big D" can be avoided forever. My bet is: 2011/2012.

"The Fed and US banking systems understand that deflation is setting in and are now operating in crisis mode... In a brazen attempt to prevent a collapse of the entire banking/financial systems (and hence the US Economy) “Helicopter” Ben Bernanke (under severe pressure from Treasury Secretary Henry Paulson and the many heads of leading financial institutions) has sacrificed the dollar in the hopes of printing/inflating our way out of this mess."

"As I’ve stated numerous times in the past, the Fed is in a panic trying to battle deflation. With new concerted efforts, such as those mentioned above, they may be able to slow the hemorrhaging of our system, but they CANNOT save it—it’s far too late for that...The Fed will continue to intervene and will stop at nothing to save our banking systems. This incessant intervention will eventually hyper-inflate our currency, but the lending crisis will still remain/get worse (credit will become unavailable). These issues will probably take several more years to play out, so I don't think we will see the ultimate bottom, and the ensuing Economic Depression/Kondratieff Winter, till 2010-12.

Best regards to all
Randy

Most of you pundits leave out the taxes. never had a credit card, dealt with cash all my life. now retired in a 907 sq ft house in Humphrey, NE. Insurance on the wife took half my social security and small pensions. three years to get her on medicare because she never worked at a job, kept the house and me ready for my work. now with the collapse of jobs that i see coming, taxes are going to go up astronomical because the system wants to get what it can from folks who have no recourse to either pay their taxes or lose their houses. that's what i see coming down the line... charlie

What of silver? Isn't silver money, just as is gold? Why is it, in all the reading and writings I find and muse over, is silver seldom mentioned? It is at least important enough such that FDR made sure he included silver coins and bullion in his order against hoarding.

I would have to agree with you and have already put my money where my mouth is.

With metals, I'm diversified about 50/50 gold/silver.

I follow Ted Butler closely and agree that Silver is probably one of the best investments today due to its unacknowledged rarity and the corresponding massive market manipulation.

When the truth about silver finally comes out, it'll be to the moon and many will be oblivious as to why.

I'm loading up as fast as my resources allow. But wonder what your take is on this matter of why silver gets such short shrift.

I too am a Butlerite, and agree with the manipulation and all, I guess the geniuses of our world can't seem to connect the dots.

Oh well, more for me.

Oh yeah, also a daily consumer of The Daily Reckoning, esp the Guru, my idol.

Your quote: "But wonder what your take is on this matter of why silver gets such short shrift."

I all relates to my previous article -- Ignorance of the masses and successful manipulation of the facts by the powers that be.

...the media conglomerates have been successful in their efforts to dumb-down society to the point that by discounting real-world problems (and real-world solutions), the nation’s people stay ignorant/oblivious, while the monied elite influence government policy through new legislation—to their own benefit and bottom lines...

These essays are the closest you'll ever get to learning the WHO, the HOW and the WHY of America's financial dismantlement:

No Recession Here
I have no recession. I went through Depression two winters ago when it rained 48 days in February and March. I went through depression when I met with Peak Construction in San Francisco, heck-everything from here on out is a joy ride.

Depression....depression. The word has been used by the heads of some pretty important banks lately....especially when describing the foreclosure fallout.

Depression. I don' think we know what that word really means yet. We probably will though.