The Kondratieff Cycle is a theory based on Russian economist Nikolai Kondratiev’s study of nineteenth century price behavior. Nikolai was convinced that his studies of economic, social, and cultural life proved that a long-term order of economic behavior existed and could be used for the purpose of anticipating future economic developments.

Kondratiev observed certain characteristics about the growth and contraction phases of the long wave and among them, he detailed the number of years that the economy expanded and contracted during each part of the half-century long cycle.

So what happened, why are we not there yet?

In an effort to stave off a US recession after the stock market collapse in 2000-2002 and the 9/11 terrorist attacks, Fed Chairman Alan Greenspan panicked and cut the Federal Funds Rate 13 times over a period of two years, until the rate reached its lowest point (1% in Jun 03) in over forty years. This aggressive Fed action, along with massive printing of money (increasing liquidity) and a lowered tax rate (remember the Bush income tax cuts?) stimulated the US economy and kept the recession very short. With a flood of cheap new money available, US consumers went on a spending spree, the reinflation process began and winter was delayed.

Had Greenspan not panicked and allowed market forces to work, it is more than likely Kodratiev’s theory would have proved correct already, but Alan staved off our looming Kondratieff Winter when he held interest rates at this 40-year low to inflate his next bubble--the massive US housing bubble.

It was a complete success for the Maestro and our deflationary depression was defeated… Well, at least temporarily…

By now it certainly is no secret to anyone that the US housing bubble has burst; that credit markets are in unprecedented turmoil; or that the Fed is back to battling some of the same (albeit larger) pressures we faced earlier this decade.

“ The problem right now is: The largest speculative bubble in our world’s history is beginning to deflate (Housing Bubble) and its reverberations are being felt across the entire globe: Hedge funds are collapsing, bank write-downs are massive, toxic waste marked-to-model Commercial Paper (CP) sitting in off-balance sheets cannot be offloaded (and will soon have to be accounted for), credit markets are drying up, and home foreclosures (the catalyst to all these problems) are just now getting started.”

“ The Fed and US banking systems understand that deflation is setting in and are now operating in crisis mode... In a brazen attempt to prevent a collapse of the entire banking/financial systems (and hence the US Economy) “Helicopter” Ben Bernanke (under severe pressure from Treasury Secretary Henry Paulson and the many heads of leading financial institutions) has sacrificed the dollar in the hopes of printing/inflating our way out of this mess.”


In two of my recent posts (Inflation or Hyperinflation) and (Will Bernanke Cut on Dec 11th) I told you that Ben Bernanke and crew were trying to fight deflation with new inflation and then explained how their efforts were an attempt to bail out the banking/financial system—actions that were creating massive consumer inflation and diminishing the dollar’s purchasing power.

I feel that Ben Bernanke (using the same old bag of tricks from Alan Greenspan’s playbook) will continue to lower rates (through 08) while simultaneously increasing liquidity, but in due course (with locked up credit markets) he will be relegated to the act of pushing on a string and the markets will finally wake up--realizing the emperor has no clothes.

Could this lead to a Kondratieff Winter?

I think so, and so do many others…

Though already familiar with the Kondratieff Cycle myself, I recently had the time to read a superb 31 page article from Ian Gordon (from over at the Long Wave Analyst) that described how many of the economic events today parallel very similar events of the 1920’s and 30’s, and how the delayed Kondratieff Winter is once again standing at our doorstep, but with much colder winds this time.

If you have the time yourself, I highly recommend you read this entire article! Again, it’s rather lengthy but well worth your time. THIS IS IT!

A few snippets below:

“This is it. The Kondratieff winter is now underway in earnest and nothing can stop it. The huge credit expansion initiated by the Maestro, the past Federal Reserve Chairman, Alan Greenspan, has now reversed. The ensuing credit contraction will be devastating. It will take down creditor and debtor alike and will result in a destructive and frightening deflationary depression.”

“This time it is different. As the 4th Kondratieff winter unfolds, most of the world is party to the debt bubble and the congruent speculative mania. The sheer size of this situation is at least 100 times greater than 1920s. Thus, the repercussions are likely to be far more punitive than during the ‘dirty 30s’.”

“Never in the history of the world has there ever been a credit bubble of the recent magnitude. All made possible by a worldwide fiat monetary system, which has been grossly mismanaged by the exorbitant use of the printing press. But nowhere more so than in the United States, which had a moral responsibility to temper her fondness for debt, because of the extraordinary privilege accorded to the dollar as the world’s reserve currency. Now the chickens are coming home to roost. The credit bubble is rapidly losing air. It can not be re-inflated, much as the Federal Reserve will try. The sheer size of the bubble and the attendant speculative excesses makes the task impossible. These speculative excesses include a derivatives market valued at approximately $525 trillion, a US stock market valued in excess of $17 trillion, a housing market currently valued at about $21 trillion, but now rapidly depleting in value, a host of packaged debt instruments with little or no value. The banking system is already beginning to show signs of strain from the initial credit problems. When credit can no longer be expanded, it contracts. Credit contraction is deflationary because the economy collapses without the continued sustenance of debt. Deflation is further exacerbated by a collapse in asset prices.”

“Regrettably, many people believe that their leaders can always positively control the future. It is a mistaken belief that always costs them dearly.”

“Following the previous Kondratieff autumn stock bull market in peak in 1929, many former heroes paid dearly for their hubris. Up to 1930, Andrew Mellon was touted as perhaps the greatest Secretary of the Treasury since Alexander Hamilton, who was appointed to that position in 1789. Thereafter, to save Mr. Mellon from possible impeachment, President Hoover appointed him as Ambassador to Great Britain in 1932.” A quick thought--will this eventually turn out to be Greenspan's Fate? 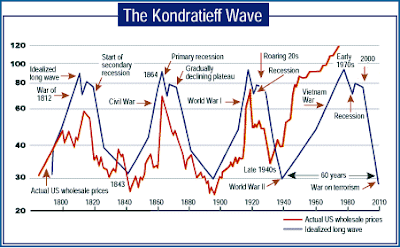 With all this said you may be wondering when I think the winter season will set in? Well, as previously stated in other posts, if we are fortunate enough to evade a complete systemic banking failure (If not--then all bets are off), I feel the powers that be will find a way for us to muddle through until ~ 2010 (hyper-inflating and killing the dollar along the way), but fortunately (or unfortunately depending on how you feel) I don't think Ben “The Helicopter-Man” Bernanke can inflate forever and Kondratieff Winter will arrive ~ 2010-2012.

Well done, I have been warning on my blog since Dec to get in cash.

Foreign markets crashing and burning this MLK day, Tuesday will be awful on the US exchanges, maybe even crash like.

Those who insure against losses are bankrupt themselves....leaving maybe $Trillion up in the air.

The financial system is seizing up and there is nothing the FED (reason for problem)or Bush can do, and you dont want to be LONG here or standing in the way.....you just want to survive and protect what you got!!!

Thanks for posting up Duratek. Agree with you--things are looking pretty bad and Tuesday could be a rout.

Post up a link to you blog--I'll take a look