If you haven't been hiding under a rock over the last few years, you're probably already aware of some of the various #1 records Las Vegas has attained during this period - records to include:

Las Vegas is #1 - The Dumbest City

The site analyzed the nation's 55 metropolitan areas with 1 million or more residents, evaluating those markets based on nonfiction book sales tracked by research firm Nielsen BookScan; the number of libraries per capita; the ratio of colleges and universities; and the percentage of residents older than 25 with bachelor's and master's degrees.

If you tally all of those factors, Las Vegas ranks dead-last among the country's big cities. Of its 1.9 million residents, 14 percent earned bachelor's degrees, and 7 percent hold master's degrees. Las Vegans have bought 1.1 million adult nonfiction books year-to-date, or fewer than one tome per resident. (But hey, we'll go head to head against anybody on adult-video sales!) 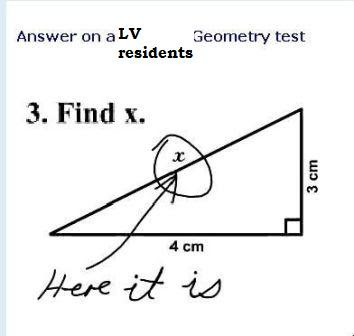 OMG - too funny, yet somehow fitting for the "City of Sin".

I imagine the City's leaders would like to keep this information secret though - under the label of "What happens in Vegas stays in Vegas".

Las Vegas, a City that was once caught up in every excess imaginable - and it's people (including its leaders) ignorant enough to think the good times party would last forever...

Reality has now struck and it's a huge blow... Anyway, this is a well deserved label.

Too Funny. But the real humor is in the poorly worded question. Find is a term that is generally associated with a location. As a mathematical term it would be used in a phase like "find a point of convergence". The question here should have read something more like "Solve for x" to be clear.

The person that answered this question this was apparently quite adept at following poorly worded ambiguous instructions (which were probably written by someone in Vegas too).

Vegas was the one place in the country where having an educational or ethical bent was an impediment to earning 50-300k per year.

It is hard to find solid ground when attempting to criticize the individual pathologies that are the result of corrupt institutions like our government education (mind control/habit training) experiment.

Watch were you point the finger.