Keep an eye on 10,800, as it's the next downside resistance - followed by 10,680. I expect them both to be broken - however timing is the only uncertainty. 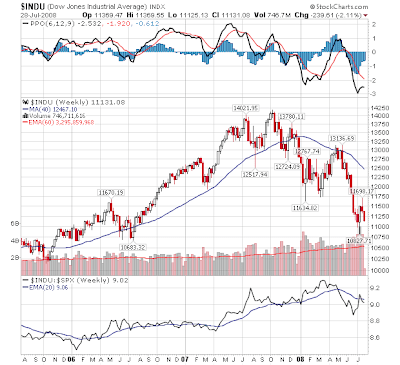 With that said, tomorrow we will see data released from the International Council of Shopping Centers showing major retail chain sales data -- Note: Consumer Spending is 70% of the US economy.

Additionally, Monthly Consumer Confidence data will be released tomorrow -- a survey of consumer attitudes on present economic conditions and their expectations of future conditions.

I just checked opening futures for tomorrow, along with current Overseas markets: They are currently a sea of red.

Certainly, that was big news, but what I think may be even BIGGER news is: Andrew McCain, son of Republican nominee, John McCain, has resigned from Silver State Bank's board of directors this weekend -- McCain's son resigns from two Boards of Directors

Well, I suggest you keep an eye on Silver State Bank. Word on the street is they are not doing well.

I can only imagine the FDIC is working disaster/cleanup plans and decided it's probably time for Andrew to get out of the picture before the bomb goes off.

Politics at it's democratic best - gotta love it!

In yet another bizarre development in the saga of CMKM Diamonds, better known as CMKX, one of the largest financial frauds in history, Andrew McCain, the son of presumptive Republican presidential candidate John McCain, resigned from the Board of Directors of Henderson, Nevada based Silver State Bank, the bank where hundreds of millions of dollars was deposited as it was stolen from CMKX shareholders.

Randy! You called it! Silver State just got FDIC'ed!