Las Vegas Homeowners: 1/2 are upside down

A new report from Zillow says that half the people who have bought homes in the Valley within the last five years are now upside down. 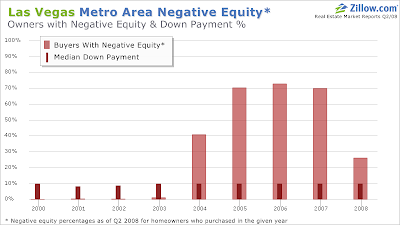 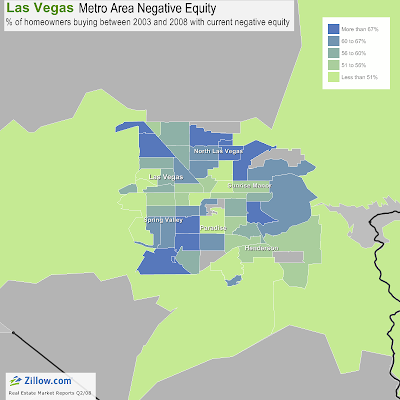 Owners of more than half of all homes sold in the Las Vegas area in the past five years have negative equity in their homes, according to a new report.

The report from Zillow.com, which tracks real estate values across the country, indicates that home prices in the Las Vegas area have fallen to levels not seen since 2003, and homes sold for a loss in the second quarter of this year made up 69 percent of all home sales.

The report indicates that 99.4 percent of homes lost value in the past year.

Among the report's other findings:

- More than 48 percent of homes sold in the Las Vegas area in the second quarter of 2008 were foreclosures.

This negative equity situation was caused by excessive speculation and Subprime use - and was exacerbated by the current credit crisis.

The problem however is likely to get much worse: with a massive (>28,000 home) inventory overhang, Alt-A (Exploding ARMs/Liars loans, etc) starting to reset, significantly falling gaming revenue (Las Vegas: Gaming Revenue down > 16%) and an economy reeling from recession (Las Vegas Economic Recession is here) home prices have nowhere to go but down -- much further down.

So, will the headline this time next year be: Vegas home prices have fallen to 2000 levels and 60% of those who purchased in the last 8 years are upside down?

Guess only time will tell...

In Detroit, because there are so many foreclosed homes being gutted by thieves who are stealing the sellable items, such as copper pipes, sinks, fixtures, appliances, etc, the banks cannot sell the homes. The properties goes unkept and become a negative neighborhood asset. So now, the banks are selling these properties for $1.00 (one dollar!). It costs the bank around $10,000 to sell a property for $1.00.

It has come to that! read more about it on: http://1031netex.wordpress.com/

I am wondering if in addition to the "eye opening" statistics you provided ( how many people are "upside down" in their mortgages ) if you know how many of these people actually walk away from their homes. Also, monthly stats on the number of people being laid off from the casinos would be another interesting statistic.

Detroit situation is quite scary - thanks for the info Jerry.

Regarding those who walk away:

Numbers released today show Nevada has once again claimed the top spot on the list of states with the highest foreclosure rates.

RealtyTrac reported that bank repossessions in Nevada were up 384 percent in the past year, while default notices were up 59 percent.

Thanks to housing, loss of construction and a struggling casino industry, the state's unemployment rate hit a new 14-year high in July.

According to a new report released Friday by the Department of Employment, Training and Rehabilitation, Nevada's seasonably adjusted unemployment rate rose to 6.6 percent, which is up from 6.4 percent in June.

Nationally, the unemployment rate was 5.7 percent in July.

Some of our predicted, longer-term job saviors are crumbling: Deutsche Bank to Foreclose on $3.5 billion Cosmopolitan Resort & Casino

Getting from here to there is going to be painful and confusing. But I've been trying to figure out what "there" is going to look like.

For the last two decades the American Dream has been home ownership for everyone. Easy credit made that almost possible. But over the last decade people went from mortgaging 3 years salary to more than twice that amount. They were essentially enslaving themselves for the dream of home ownership.

The big difference, I think, will be that these same people will be enslaved to landlords rather than to mortgage companies.

There is still a lot of money in the world, and that money is already starting to look at foreclosures as a future investment. Landlording is going to become big business, and the dream of everyone owning their own home is going to be a chapter in the history books.

When money is created in the form of a loan so that someone can buy an oversized house, that money flows through to the builder and out into the world. It is not destroyed by crashing prices, it is already in circulation. And all that money is going to come back in strong hands and the home ownership will be consolidated from the many weak hands to the few strong hands.

It's the same as in the stock market, through consolidation those on margin are shaken out and the strong hands not on margin take control.

I think the "there" will look a lot like here, except most houses will be occupied by renters, not by homeowners, even in the nicer neighborhoods.

A lot of people are thinking that home prices are going to crash so low that everyone will once again be able to own their own home. I don't believe it is going to work out that way. I think we are getting close to the point where we will see wholesale buying of foreclosed homes... in cash!

I am blessed that my house is paid in full, and for that I am very grateful.

The report from Zillow.com, which tracks real estate values across the country, indicates that home prices in the Las Vegas Buy Cialis Online area have fallen to levels not seen since 2003, and homes sold for a loss in the second quarter of this year made up 69 percent of all home sales.

A new report from Zillow says that half the people who comprar direto da china have bought homes in the Valley within the last five years are now upside down.