Another Taxpayer Bailout - Under Who's Authority?

I can't believe this crap - let Lehman fail and two days later bailout AIG with taxpayer funds. Who authorized this? Certainly not me - I think we should let them fail.

The main reason we're in this crisis today is because we've been living a lie - an economic facade caused by too much easy credit/money, followed by excessive fraud, corruption and manipulation... For too many years TPTB prevented us from taking the required harsh medicine (recessions) needed to cure our economic ills. Now, once again, we are delaying the inevitable and laying a larger (unpayable/unsolvable - except for default or hyperinflation) economic bill on our children - absolutely reprehensible!

Dammit folks - don't you think it's time to take the medicine?

The Fed will not comment on reports that it was considering placing AIG into conservatorship, saying it did not have the legal authority to do so.

So, policymakers were called into an emergency meeting tonight:

Members of the leaders’ staffs were asked to leave the meeting shortly after it began.

If the emergency talks fail, the collapse of AIG will be far worse than that of Lehman Brothers. 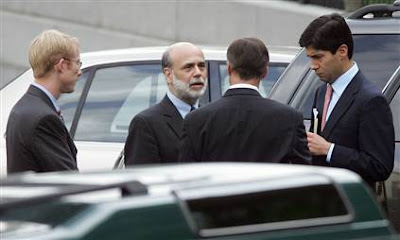 Insurance giant on a knife edge

The future of insurance giant AIG hangs in the balance as fears grow that it could be the next firm to fold in the wake of the credit crisis.

The state of New York has enabled the firm to access a "multi-billion dollar" finance plan in the short term, but it needs further funds to remain intact.

Analysts say the collapse of AIG would have a devastating impact on markets.

Senior banking executives are reportedly holding negotiations at the US central bank, the Federal Reserve, in an attempt to arrange a rescue bid.

But on Tuesday, Mr Paterson said AIG now had one day to raise another $80bn (£45bn) to save itself from collapse.

The plan appears to be for some form of private sector rescue, perhaps with backing from the Fed, says the BBC's economics correspondent Andrew Walker.

US Treasury Secretary Henry Paulson refused to bail out Lehman Brothers, the fourth-largest investment bank in the US, at the weekend.

But our correspondent says he may deal differently with AIG if he feels the damage caused by its collapse to the wider financial system would be too great.

In an extraordinary turn, the Federal Reserve was close to a deal Tuesday night to take a nearly 80 percent stake in the troubled giant insurance company, the American International Group, in exchange for an $85 billion loan, according to people briefed on the negotiations.

All of A.I.G.’s assets would be pledged to secure the loan, these people said, and in return, the Fed would receive warrants that could be exchanged for an ownership stake. Stock of existing shareholders would be diluted, but not wiped out.

A person briefed on the matter said the agreement does not require shareholder approval.

The Fed’s action came after Treasury Secretary Henry M. Paulson and Ben S. Bernanke, president of the Federal Reserve, went to Capitol Hill on Tuesday night to meet with House and Senate leaders. Mr. Paulson called the Senate majority leader, Harry Reid, Democrat of Nevada, about 5 p.m. and asked for a meeting in the Senate leader’s office, which began about 6:30 p.m.

A.I.G.’s board approved the proposal at a meeting Tuesday night, the same individual said.

Without the help, A.I.G. was expected to be forced to file for bankruptcy protection.


Fed nears a deal to take over ailing AIG

The Federal Reserve is close to a deal to take an 80 percent stake in American International Group in exchange for an $85 billion loan, according to sources familiar with the negotiations.

AIG’s failure could open the ugliest chapter yet of the financial meltdown.

“The glimmer of hope has turned into a ray of hope,” said the person, who asked not to be named because of the sensitive nature of the talks to help AIG.

Treasury Secretary Henry Paulson and Federal Reserve Chairman Ben Bernanke met with members of Congress to brief them on options the government is considering. The meeting ended without Bernanke and Paulson commenting.

Hoping to stave off what would be the ugliest chapter of the financial meltdown, AIG executives huddled with Fed officials and representatives from top banks at the New York Fed in downtown Manhattan to find the cash the huge insurer needs to stay in business.

One solution: A plan to have the government provide financial backing to ensure that AIG could secure a short-term loan from banks worth up to $100 billion to stay out of bankruptcy court, the person, who had direct knowledge of the talks, said.

He said the discussions had stalled because AIG did not have enough collateral to obtain a loan of that size. Both sides were trying to figure out how to close the gap between the amount AIG needs and the amount of collateral it has.

The person said it was increasingly likely the Fed would step in with taxpayer money.

Shareholders would be severely diluted by the bailout, which involves a bridge loan, according to sources. The government would receive warrants for most of AIG's equity in the bailout being negotiated. CNBC said the deal would give AIG incentive to sell its assets quickly to help pay off the bridge loan.

Just days ago, Paulson said the government would not help Lehman Bros. with the kind of taxpayer-backed funding that JPMorgan Chase & Co. received six months ago to buy ailing Bear Stearns.

“They’re too big to fail. AIG touches too many people and too many companies globally, and it would be much more of a disorderly event if it went bankrupt than it was with Lehman,” said Anton Schutz, president of Mendon Capital in Rochester, New York.

Earlier, New York Governor David Paterson told CNBC that the insurer had “a day” to solve its problems. A failure would result in a “catastrophic problem” for the market, said Paterson, whose administration oversees regulation of AIG.

If AIG were to file for bankruptcy, billions of dollars of insurance contracts known as credit default swaps would likely be wiped out. Much of those losses would be absorbed by the companies holding the contracts, which were sold by AIG.

Investors Worry Over AIG's Future - DOW will be down 1,000 points tomorrow if AIG can't find solution

This all makes me incredibly sick to my stomach! These assholes who ran these corporations lived large while the getting was good, and now that they're all losing their shirts they scream for government bailouts ... and get them!

Of course, the government's willingness to bailout these folks doesn't surprise me one bit since they are all one big happy family. For goodness sake, the Treasury Secretary used to be the head of Goldman Sachs!

The only way to send these people a message that we don't approve of what they're doing is to let their "dollar" tank, but instead it's going UP! WTF!

I'm really losing my mind these days because nothing makes sense anymore in the financial realm.

Sorry for the rant, but I've reached my limit.