DOW Falls/Closes Below 10,700 support - Morgan Stanley and WAMU Next 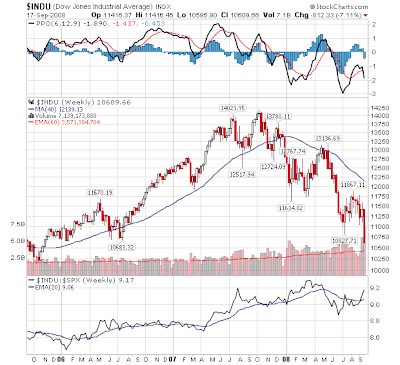 The cost of credit-default swaps protecting against a default on the companies' bonds jumped by a record, with Morgan Stanley's rising to levels typical of companies in distress.

As of last week, Washington Mutual said it wasn't looking for a buyer, but in the rocky terrain of the financial markets, things have a way of rapidly changing.

WaMu has officially cleared its last hurdle for a sale, with a major investor waiving an agreement that prevented the lender from raising equity without compensating it for dilution. TPG Capital, a private-equity firm that invested $2.0 billion in the company earlier this year as part of a larger $7.0 billion capital increase, said Wednesday that it would "waive the price reset payment provisions that were agreed to with the bank at the time of our original investment in April 2008," adding that it was "in the best interests of Washington Mutual" and its investors. TPG would have been protected if WaMu sold shares below the $8.75 it paid in April, far above the current price.

Merrill Lynch analyst Ken Bruce said in a note to investors on Wednesday that a sale of WaMu seems imminent now that TPG has given a green light.

Washington- The Federal Reserve has announced a series of lending and liquidity initiatives during the past several quarters intended to address heightened liquidity pressures in the financial market, including enhancing its liquidity facilities this week. To manage the balance sheet impact of these efforts, the Federal Reserve has taken a number of actions, including redeeming and selling securities from the System Open Market Account portfolio.

The Treasury Department announced today the initiation of a temporary Supplementary Financing Program at the request of the Federal Reserve. The program will consist of a series of Treasury bills, apart from Treasury's current borrowing program, which will provide cash for use in the Federal Reserve initiatives.

HOLY CRAP! THEY'RE LITERALLY PRINTING NEW MONEY!!!! John Williams at shadowstats.com says that this is exactly why gold has shot up today!