The death of the dollar? 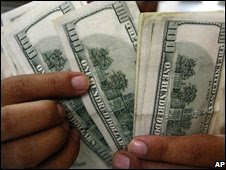 We are living in economic chaos. Banks, homes, jobs, and businesses are at risk.

Yet curiously, the one thing that seems stable is the dollar.

It is a symbol - and a lever - of American power and leadership, it is the standard unit of account for much of the world's economic activity. And in times of crisis, it has often seemed a safe haven.

But in the longer term, some experts believe this crisis could mark a turning point in the dollar's fortunes, hastening a fall from power which has seen its value decline over several years before its recent rally.

"I think today's financial crisis is going to hasten the end of the dollar as the world's reserve currency", says Avinash Persaud, chairman of Intelligence Capital Limited.

"For the first time ever we're now seeing that in the financial markets it costs money to guarantee you against a US government default.

For the American government there is simply no such thing as living beyond its means. With the rest of the world demanding dollars, all the US has to do is to keep printing them

He wonders whether the combined cost of foreign wars and domestic bail-outs is being seen as "a burden too far" for the US.

But for the dollar to lose reserve currency status would end what has been in many ways a huge bonus for the US.

It is sometimes described as the ability to write cheques that no-one ever cashes.

This makes possible things that no other government could imagine - a power that America's rivals have historically denounced as an "exorbitant privilege".

More here from BBC News: The death of the dollar?


For my own personal in depth analysis of the dollar, including it's history and likely future, please see this link: Dollar: Faltering Foundation of US Economic Strength - Probably one of my all-time best blog posts

What make the dollar and the US desirable is the stability of our country (so far); the idea of the chance at freedom; a high living standard (but may not be for much longer); and a large market with a good distribution system. This may not last. I think the money boys have decided we need to torpedo the dollar and forgo all our debts. I think we could continue the game if all parties agreed to. I think the morons at the FED have decided to end the Ponzi scheme and cash out. Kit - Tacoma