Consumer spirits are breaking down to new lows, the results of the Reuters/University of Michigan consumer sentiment index which dropped 5 points at mid-month to 56.2 vs. January's 61.2. Expectations, the leading component of the index, dropped to 49.1 for a nearly 9 point loss, a sizable loss that points to a run of disappointment ahead.

The bottom line is that consumers are extremely worried about current and near-term economic conditions - notably the job market. 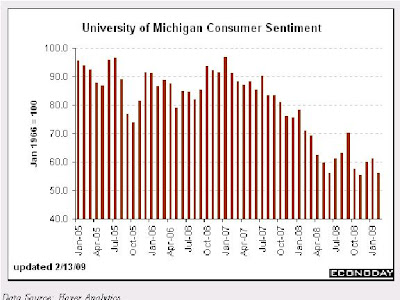 Feb. 13 (Bloomberg) -- Confidence among U.S. consumers fell in February as job losses and declining prices for stocks and homes undermined Americans’ view of their financial well-being.

The Reuters/University of Michigan preliminary index of consumer sentiment fell to 56.2, from 61.2 in January. The drop is the first in three months and puts the index near a 28-year- low reached in November.

The longest recession since 1982, including the loss of more than 3.5 million jobs, is damping Americans’ spirits, prompting them to curtail spending. Congress yesterday moved toward passage by the end of this week of a $789 billion economic stimulus plan that would cut taxes, extend unemployment benefits and expand federal spending on roads and other infrastructure.

“It’s reasonable to expect consumers to be bouncing along the bottom at this stage,” Christopher Low, chief economist at FTN Financial in New York, said before the report. “Things are still deteriorating and when it comes to confidence it’s all about jobs and income.”