Why are gas prices still so high?

I'm sure most of you still remember well the near-crisis recently experienced in the US - with regard to oil/gas prices. From early 2007 through mid 2008, oil skyrocketed in price and eventually peaked out at ~ $147bbl in July 2008 - then it fell off a cliff -- due to a myriad of issues: (1) Oil Market Manipulation (2) A significant drop in global demand and (3) A stronger US Dollar. 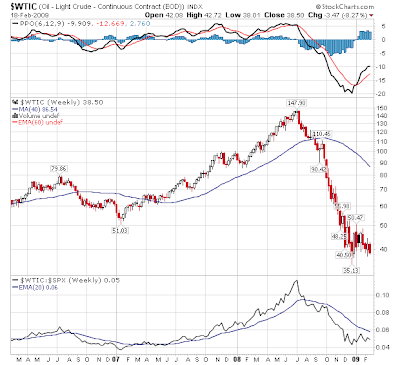 Anyway, during that swift runup in crude, gasoline here in Las Vegas correspondingly (and swiftly) rose in price - eventually peaking out at $4.26 a gallon. It then took a while after the collapse in oil price for gasoline prices to drop, and then there always seemed to be a significant lag between the two on the way down - eventually however, gas fell and bottomed at a low of ~ $1.70 a Gallon. 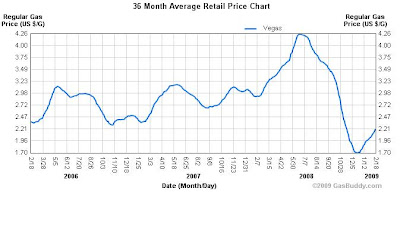 What strikes me and is disconcerting of late is the recent $.50 rise in gas prices over the last month, yet oil has remained relatively steady and is still dragging along the bottom at ~ 38bbl.

So what's going on here - why the disparity?

According to AAA’s Windy VanCuren:

The reason gas prices have been increasing in the past few weeks, “Is because gasoline refiners have been severely cutting back their output of gasoline either by design or due to “maintenance and operational issues”.“ VanCuren adds, “Industry watchers who trade gasoline trade futures seem to be persuaded the industry will eventually be able to cut the nation’s gasoline inventories enough to keep retail prices at an elevated level.“ Basically meaning they expect the law of supply and demand to swing prices higher as supplies of gas shrink.

Whatever! Sounds to me like a cheap way for the gas/oil refineries/companies to increase their profit margins - once again at the expense of the little guys who are losing their jobs, homes, cars and can barely afford to put food on the table for their kids.

Absolutely disgusting! This corporate bloodsucking crap (with Gvt backing I'm sure) has got to end! Need to wake up Sheeple!

What happened to sales and gasoline taxes in LV ? Did Nevada raise those taxes because of current budgetproblems ?

In the 1st four months of 2008 the US and China were filling up their Strategic Petroleum Reserves up to the gills. In March 2008 the US started a war of words in order to justify and prepare the rest of the world for an US military attack on Iran in the 2nd half of 2008. This extra demand and the tensions in the Middle East pushed oil to over $140. But due to deleveraging the price of oil went to under $ 40 in december. I personally think oil will go up again in the second half of this year.