U.S. Stocks Fall, Sending Market to Its Lowest Close Since 1997

Feb. 23 (Bloomberg) -- U.S. stocks fell, sending the Standard & Poor’s 500 Index to a 12-year low, as concern that the deepening recession will erode earnings offset the government’s pledge to give more capital to banks. The Dow Jones Industrial Average tumbled 250.89 points, or 3.4 percent, to 7,114.78, its lowest since May 1997 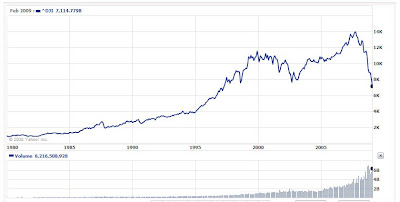 “Many investors simply can’t contemplate any more stock market risk in their portfolios,” said Fritz Meyer, the Denver- based senior market strategist for Invesco Aim, which oversees $357 billion. “Sentiment in the market is very weak and negative.”

“We’re still being governed by how deep the recession will be,” said Mike Ryan, head of wealth management research for the Americas at UBS Financial Services Inc. “There just don’t seem to be any clear signs that some of the problems have run their course.”

The financial crisis will be harder to end than the Great Depression and may force banks to be nationalized, “Black Swan” author Nassim Nicholas Taleb said in a Bloomberg Television interview. Rare and unforeseen events are known as “black swans” after Taleb’s 2007 book, “The Black Swan: The Impact of the Highly Improbable.” The financial crisis isn’t one, he said.

“The black swan for me would be for us to emerge out of this unscathed and return to normalcy,” Taleb said. Compared with the Great Depression, this crisis is “very different, and it requires much more drastic action.”

American International Group Inc. is preparing to report a quarterly loss that will likely top $60 billion, according to people familiar with the matter, a mammoth hole that could force the government to expand a bailout package that's already at $150 billion.

Investment losses and a series of wayward bets on derivatives and securities-lending plans have pushed AIG's expected losses for 2008 over $100 billion, a sum more than 70 times the insurer's current market value.

The losses have set off another crisis for both the newly installed Obama administration and the Federal Reserve. Letting AIG fall into deeper distress...


Fed ready to use all tools to fight crisis - Fisher

Feb 23 (Reuters) - The Federal Reserve stands ready to do everything in its power to combat the financial crisis and recession and buying long-term Treasury bonds could be helpful, a top Fed official said on Monday.

"Few of us imagined in our wildest dreams that our global economy could have turned so rotten so quickly," Richard Fisher, president of the Federal Reserve Bank of Dallas, told Harvard's John F. Kennedy School of Government in Cambridge, Massachusetts.

"We are duty-bound to apply every tool we can to clean up the mess that has soiled the face of our financial system and get back on the track of sustainable economic growth with price stability," he said.

With companies slashing jobs aggressively, Fisher said that "unemployment appears to me to be headed in the direction of, and possibly past, 9 percent."

He said the Fed must avoid appearing (emphasis is mine) to monetize the "exploding" fiscal deficits, as this could undermine confidence in the central bank's independence and commitment to price stability.


Stress test could lead to some bank nationalization

U.S. banks that fail a looming government stress test of their financial viability could be forced to accept government investment, pushed into shotgun marriages or simply nationalized if the institution's situation is bad enough, regulatory observers said.

As part of the stress test, bank regulators will consider how much capital a bank has left if it were to register its losses immediately, according to Fred Cannon, managing director at investment bank Keefe, Bruyette & Woods in San Francisco. The test is expected to also examine a bank's capital position over the next two or three years by taking into consideration its losses over that period. Each bank's tax position and what credits they have available will be examined as well.

Feb. 23 (Bloomberg) -- JPMorgan Chase & Co., the second- largest U.S. bank, slashed its dividend by 87 percent to 5 cents and said it plans to maintain that level “for the time being.” The bank and its predecessors haven’t cut the dividend since 1990.


AMEX paying some cardholders to cancel

American Express wants you to leave home without them.

In a marketing turnabout, the largest U.S. credit card company by purchases, is offering select members a $300 gift card to drop its card, according to a notice on its web site.

To collect on the deal, entire card balances must be paid in full between March 1 and April 30.

American Express said in a regulatory filing that its annual net charge-off rate, which measures credit default, hit 8.29 percent in January from 7.23 percent in December, while the rate for loans at least 30 days delinquent rose to 5.2 percent from 4.8 percent.

More companies are instituting these short-term hiatuses, called furloughs, as a humane alternative to permanent job cuts. But the spread of furloughs to new sectors and a new class of workers has created a host of issues.

"The places that are now exploring this or discussing this are not industries where it's traditional," says Joel Cutcher-Gershenfeld, dean of the School of Labor and Employment Relations at the University of Illinois, Urbana-Champaign. "I think a lot of [human-resources] offices are sort of having to figure this out. There isn't a rule book that they were given."

Now furloughs are happening in state governments and universities, publishing, technology companies and even the arts and entertainment industry.

In the past few months alone, the states of California and Maryland, Clemson University, Texas semiconductor firm Spansion, Gulfstream Aerospace, and publishing firms like Media General and Gannett have announced furloughs of professional workers.

A Watson Wyatt survey of 245 large U.S. companies to be released this week found that 6% of respondents plan mandatory furloughs over the next 12 months in reaction to the economy, with 11% having already implemented one. Many are taking these actions for the first time.

That's the case for Arizona State University. Never before in its 114-year history has the school used furloughs, says Matt McElrath, chief human-resources officer for the 67,000-student college.

"Had we not done this, we would have had to lay off about 1,000 administrative personnel," he says.

However, furloughs are no guarantee against eventual layoffs or other cuts, especially in extreme budget situations.


New U.S. stake in Citigroup may not calm doubts

NEW YORK (Reuters) - Even if the government took a large common equity stake in Citigroup Inc, worries would likely persist about the bank's ability to absorb soaring losses in a deepening recession.

The third-largest U.S. bank by assets is in talks with federal regulators on a plan for the government to increase its stake, a person familiar with the matter said. Converting $45 billion of preferred stock, which the government obtained last fall, to common stock is one of many options, the person said.

An agreement could be announced Monday or Tuesday, CNBC television said.

"It can be taken as a commitment that some banks are too big to fail and the economic consequences too bad to contemplate," said Tony Morriss, senior markets strategist at ANZ Investment Bank, in Sydney.

How bank nationalization would work