1. The American people elect a president with a total of 42 days Experience as a U S Senator from the most politically corrupt state in America whose governor is ousted from office. The President's first Official act is to close Gitmo and make sure terrorists civil rights are not Violated.

3. The CIA Boss, Leon Penetta with absolutely no experience, has a daughter Linda we find out, that is a true radical anti-American activist who is a Supporter of all the Anti-American regimes in the western hemisphere.

4. We got the most corrupt female in America as Secretary of State; bought and paid for.

5. We got a Tax Cheat for Treasury Secretary who files his own taxes.

6. A Commerce Secretary nominee who withdrew due to corruption charges.

7. A Tax cheat nominee for Chief Performance Officer who withdrew under Charges.

8. A Labor Secretary nominee who withdrew under charges of unethical Conduct.

9. A Health and Human Services Secretary nominee who withdrew under charges of cheating on his taxes.

And that's just the first two weeks. . . But who's counting.

America is being run by the modern-day Three Stooges ~ Barrack, Nancy, and Harry ~ and they are still trying to define stimulus. 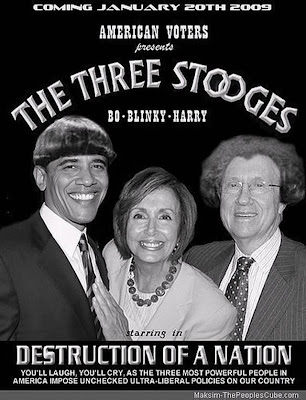 I recognize two of these persons. President Obama, Speaker of the House Nancy Pelosi but who is the third person ? Harry Reid from the state of Nevada or is it a Republican representitive ?

Do you really think it would have made a difference if there had been a Republican majority in Congress and a Republican president ?

It's time for REAL change ! Ron Paul for President !!!

If the decline of our society as a whole had not been so steep over recent decades would there have been more accountability for those who lead the Republic?

Without controversy there has always been all manner of wickedness present in every society. However when an acceptance of corruption and all manner of selfishness becomes the norm will it not weaken a society? The PTB will continue to take advantage of this. Will the American people reap what they have sown?

Real history and civics were banished from the classrooms, and now we are indeed reaping the whirlwind. I am negligent as well, for it is only in the last six months that my eyes have been opened. I am equal parts angered and ashamed that I have been just another sub-citizen. No longer.

But what gets me is the tendency for much of America to turn fight against the truth because it's uncomfortable/inconvenient. We might be able to clarify the reasons for such a thing. Fear is undoubtedly a big player in that regard. But such a thing fails to justify the furthering of lies through embracing them or spreading them.

I believe that too many people prefer a familiar lie to an uncomfortable truth. Facing that truth requires the very sort of reflection and self-awareness that they have been running from all their life. My God, facing a truth may even involve coming to terms with ones on complicity in it's perpetuation and subsequent harm. "Hey wait a second, are you telling me I'm in some way RESPONSIBLE for the sad state this world finds itself in"?