Jefferies & Company, an investment bank and securities firm, said Las Vegas casino operators like Hooters, Fontainebleau, Black Gaming, Cosmopolitan and Herbst (owners of the Terribles chain) are at a higher risk for defaulting on loans. Harrah’s and Station Casinos are at an even higher risk, Jefferies & Company says. 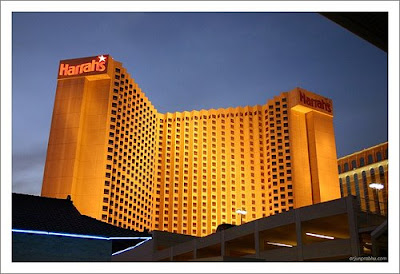 Leverage in every Nevada gaming market is the highest it has been in 17 years, the firm said in its Friday report.

Station Casinos Inc., whose Las Vegas-area properties include Red Rock Casino and the two-month old Aliante Station, may be on the brink of default, making its private-equity owners a casualty of the largest recorded decline in gambling revenue. 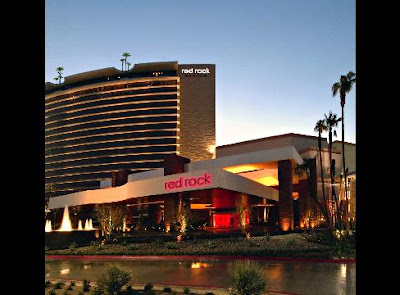 “From a liquidity perspective, they are on the brink of bankruptcy,” New York-based Holloway said in an interview. “It depends on their ability to negotiate with lenders and willingness to amend the debt.”

The current economic crisis has left many of the Vegas giants in a pinch and with the delay in development for MGM and their $5 million dollar MGM Grand Atlantic City gaming resort, the company has started to look at unloading some of their properties. This includes the possibility of selling off 14 acres of waterfront land, next to the Trump Casino in Atlantic City.

In an attempt to strengthen their finances the company is going through the final stages of selling the Treasure Island Casino to a Las Vegas mogul by the name of Phil Ruffin. Although the $775 million from this sale will definitely help MGM Mirage out during this economic crisis it still leaves the company vulnerable to a declining economy. 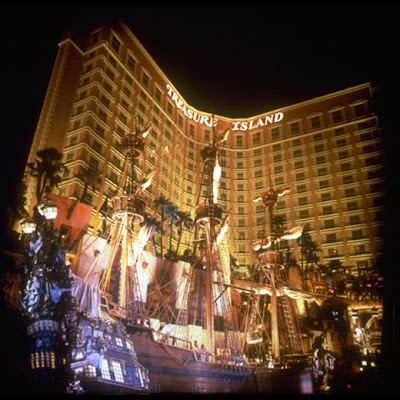 The $5 million dollar expansion which was placed on hold earlier this year is also a consideration for liquidating property.

“We would hope in the future to be able to carry those out,” MGM spokesman Gordon Absher said of plans for transforming the property into a casino complex. “However, given the economic situation, were we to receive an offer, we would be obligated to consider it, just like we did with Treasure Island.”

“We, as a corporation, are looking to sell noncore assets. Noncore assets would be typically some of the large real estate holdings our company has,” Absher said. “We are best known for our world-famous resort brands. But what is less known is that we are the largest landholder on the Las Vegas Strip and also have strategic holdings elsewhere, including Atlantic City.”

The latest analysis from the Nevada Department of Taxation reveals widespread sales contractions for businesses, though the report also contained a few bright spots. 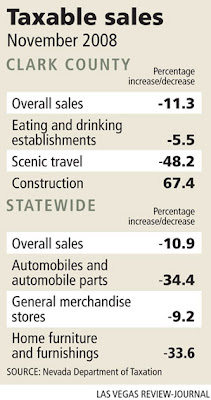 In these tough budgetary times, the chairman of a key state Senate committee is willing to consider the world’s oldest profession as a potential source of new tax revenue.

State Sen. Bob Coffin said Tuesday he would be willing to grant a hearing on proposals to legalize and regulate prostitution in Las Vegas and other urban areas of the state where it’s illegal.

The Las Vegas Democrat, who heads the Senate Taxation Committee, said he also wants to look at taxing the state’s legal brothels in rural counties.

Only “the most naive person on the planet would believe there’s no prostitution going on in the urban areas,” Coffin said. “It’s going on now unregulated and unsafe.

“I have not decided about whether or not I’d support the legalization and control of it in urban areas. But I think it’s an idea worth entertaining.”

Prostitution is legal in most of Nevada’s rural counties, but state law prohibits it in counties with populations in excess of 400,000. That means there are no legal brothels in Las Vegas or Reno.

Most every plaza has an ‘anchor,’ or a large store that draws traffic to smaller ones nearby. Across the city, shopkeepers are feeling the drag of big closures

Applied Analysis, the local market research firm, says 17 anchor stores around the valley are closed. CB Richard Ellis estimates that more than 30 anchors in excess of 20,000 square feet are empty.

“We haven’t witnessed this level of retail closures in our history,” says Brian Gordon, a principal at Applied Analysis.

And it’s only going to worsen.

Circuit City plans to close its stores nationwide in March, including four here. On Feb. 4, The Great Indoors, a home decor outlet under the Sears umbrella, will close a handful of its locations nationwide, including its Las Vegas store. Other closures include Linens N Things, Wickes furniture, Sports Authority, Levitz and Mervyns.

Two more Albertsons are closing in February, as well as four Lucky grocery stores. An Albertsons spokeswoman attributed the closings to stores not meeting their sales goals.

Paco Underhill of the international market research firm Envirosell predicts a 20 percent vacancy rate among all retail stores nationwide, and potentially higher in Las Vegas. And some analysts worry that contractual codependency, where one store’s departure allows others in a marketplace to leave, could deepen the crisis.

Real estate values around the nation have collapsed, and sales of foreclosed and "underwater" homes now dominate many housing markets, according to a report released Tuesday.

In the United States, 17.6% of all homes are now underwater, according to Zillow, as are 41.2% of all mortgages for homes bought in the past five years.

The worst-hit cities are in the once-booming Sun Belt. In Las Vegas, 61.4% of all homes are underwater.

Because so many homes are worth less than their mortgage balances, an increasing number have to be sold short. But short sale transactions can take a long time to complete, because lenders have been having trouble keeping up with the flood of requests.

The percentage of homes sold for less than what their owners originally paid has leaped up in the past couple of years. In the United States as a whole, 34.6% of the sales made in 2008 were done at a loss. In Merced, 71.6% of all sales last year were for less than the seller paid.

Stockton, Modesto and Las Vegas all had in excess of 68% of all homes being sold at a loss.

Foreclosures beget more foreclosures by adding inventory to the market, which depresses prices, which increases foreclosures, according to Humphries.

How much further will Las Vegas home prices fall?

It’s the pressing question on the minds of homeowners, concerned about the property value they are losing, and of potential buyers, who are waiting on the sidelines before they purchase.

Moody’s Economy.com projects the total decline in the market will reach 52 percent by the end of the first quarter of 2010, says Mike Helmar, director of industry services and an economist who oversees Nevada forecasts.

“We don’t have much good news for you,” Helmar says. “We do have them continuing to go down.”

Many of you already know that I think it will be even worse: LV Homes for $60 a SF

The highest unemployment figures in over a quarter century (> 9%) have state officials struggling to find some light among the gloom.

The local economy will shed nearly 4 percent of its work force in 2009, a nationwide group of public officials predicts.

Local job loss will center on the construction and tourism sectors, said Jim Diffley, managing director of IHS Global Insight's regional services division. Beyond those two pillars of the economy, broad losses should visit most industries and fields, because scarce credit will hamper growth, Diffley said.

If Las Vegas lost 3.9 percent of its current jobs base, the city's unemployment rate would jump to around 11.5 percent, said Jeremy Aguero, a principal in local research firm Applied Analysis.

A local jobless rate approaching 12 percent is "not out of the realm of possibility," Aguero said.


State leaders pray for the best

The opening day of the 75th meeting of the Nevada Legislature featured bagpipes, lengthy prayers, elegant orations and baroque floral arrangements, like a celebration of the dead.

Though it wasn’t a funeral exactly, a more somber than usual mood prevailed, and it was a little hard not to think of Nevada’s last rites.

The Legislature convened its 120-day, every-other-year session amid the worst statewide economy since the early 1980s — 9 percent unemployment, nearly 9 percent of homes in Las Vegas facing foreclosure filings and a budget deficit of $2.3 billion.

So perhaps it was a bit understandable that there was such a focus on prayer Monday, as legislators hoped for a theological cash infusion in the form of a federal stimulus bill, or maybe gold on the grounds of the capitol.

That's where we're at folks... The Las Vegas Economy is hanging by a thread and our leaders are praying for a miracle. As someone stated in the discussion forum of the link above (rephrased by me): Prayer!.. Prayer??? We are WELL past the need for prayer. We're at the point where several Human Sacrifices are required to 'fix' the economic mess we're in.

Die, you Las Vegas locals. You bastards are arrogant, and treat Californian visitors like shit, and deal shitty cards and take our money. Now that is coming to an end. Die Vega$, DIE!

The view from the north is a mirror of the south. In Washoe County (Reno-Sparks) our sales tax for October was down 18.03% over Nov 2007. All municipalities are facing shortfalls, all but Reno have had layoffs, stores closing etc.etc. We may again be the cow town with dirt roads and cattle drives on Virgina St. And that may not be a bad thing, just getting there will be painful. And ExGambler, be prepared for thousands of your expatriots from the State-Formerly-Known-as-Golden to repatriate when our feeble economy finally gives up the ghost.

I volunteer Alan Greenspan, George W. Bush, and all members of all US congresses between 2000-2008, who voted to spend more money than all other US congresses combined.

And don't forget the investment banksters on Wall Street. Using leverage greater than 10:1, they created and sold derivatives with a face value more than 10X the total yearly output of goods and services of planet Earth.

Hot off the press:

Exactly what's your beef?
The local situation wasn't sustainable, nor is it for most of the US for that matter. Is that surprising?

The powers that be will dig in their heels and try to hide it, forestall it, in fact though...they're more pre-occupied with saving their own arses via the bank bailouts.

The US (Titanic)is going down and just like its name sake ...the rich get first crack at the life boats.

No beef really, but it’s quite ironic that I was severely ridiculed back in 2006 for predicting this catastrophe.

Agree the US Titanic is sinking and the lifeboats are full of holes...

Thanks for posting up your thoughts

You are a true gentleman Randy.

Lets include George H., Clinton(Glass/Steagall, NAFTA), His wife, McCain, Obama, Graham(all of them), Dodd, geesh..... I don't have the energy to type them all out.

Only gold and silver coins issued by Congress have a place in the original US Constitution.

I was wondering why construction gained more than 60% when in fact businesses are closing and not a lot of people are buying homes.